Uluwatu Temple is one of the favorite destination site in the south of Bali . Build right on the Uluwatu cliff , approximately 100 meters above sea level . The temple is a Hindu Temple to worship Lord Siva on his manifestation as Dewa Rudra . The location and the atmosphere surround the area make this site is become the favorite place in Bali indeed . 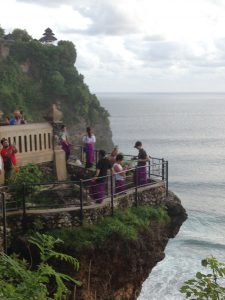 The temple from the cliff

Uluwatu Temple built around 11 century by the Holly priest Mpu Kuturan . Its written on the inscription of Padma Buwana telling the journey of the priest to Bali island . He come to the island to help the King of Bali to making a concept of Hindu Bali . One concept that will unite all the different sect from the difference. In addition the priest also built temple around Bali .

Bali island during this time were rules by King Udayana with his wife Gunapriadarmapatni  . The king  from Warmadewa Dynasty , One of the biggest Dynasty who rules Indonesia and built few kingdom around Indonesia archipelago including in Bali Aga kingdom . During this time in Bali growing 9 different sect from Hindu . And the King were realize that the different sect that growing in his kingdom were often create a conflict . And the King need someone who have a strong knowledge of Vedic  ( Hindu Bible ) concept as a foundation to unite them in one direction . Some Hindu sect that growing and control Bali island such as Siva Sidanta , Pasupata , Waisnawa , Bhoda , Rsi , Sora , Bairawa and also Gonapatya . 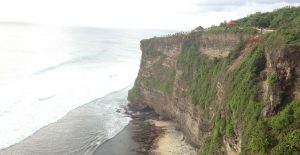 The Uluwatu cliff view from other side of the temple

King Udayana than ask Mpu Kuturan from Java island  to come and also helping the kingdom to solve the problem . With his spiritual ability and Hindu knowledge make him able to unite all the sect in one Hindu concept of Tri Murti . Tri Murti Concept where we worship three God manifestation as lord created , protector and destroyer . He also setting up the community system , well known as Desa Pakraman . In one Desa Pakraman we live in one community system and build three temple in order to worship Lord Brahma , Wisnu and Siva and God manifestation . From his idea also the concept of Tri Hita Karana were born . Tri Hita Karana is a concept of maintain good relationship between human and God , human and environment and also human and human . 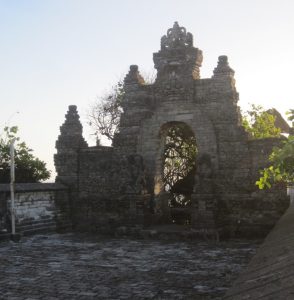 With his ability soon the priest become the highest Holly priest in Bali Kingdom . He spreed the knowledge of Vedic  concept as a foundation of Bali tradition . He also build Parahyangan or Temple in each Bali direction including Uluwatu temple .

The story related to Uluwatu Temple

Another story related with Uluwatu temple is the journey of another holly priest around 16 century . Danghyang Dwi Jendra or in Bali known as Pedanda Sakti wawu rawuh . From Java he cross to Bali island to teach Bali peoples the Hindu concept , to strengthen our believes and keeping our Hindu tradition . According the story that he founded his time is end in this world when he arrive at Uluwatu temple . Than he call the fisherman and give his clots and his wooden stick to pass to his wife and children who live in Ubud Mas .

The fisherman left the place and follow what the priest ordered to him , than he never saw the priest anymore . He only saw one flash light toward the sky from the place where the priest sit down and meditate . In Hindu we believe in Moksah , the highest level of Yoga , where our body and atma / soul unite with Paramaatma and free from reincarnation .

Kecak and fire dance , daily performance at the temple area by the villagers . The spectacular Balinese traditional dance

Nowadays Uluwatu Temple become a fantastic tourism site in Bali island . The temple lies on the edge of the cliff facing into Indian ocean . About 100 meters above sea level surrounded by forest as a habitat of long tail monkeys . The monkeys are often appear around the temple . They are quite naughty monkeys who will take anything suspicious from the visitors such as  glasses , hat , flip flop and also mobile phone or camera .

The Monkey also enjoying the sunset view while selecting the victim from the visitors . He just pretending and when he got something to snatch from the visitor he move very fast 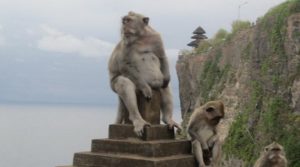 To get to Uluwatu temple is quite easy with fairly good road  . Approximately 40 minutes from Bali airport , but some time traffic is very bad especially during the Holiday season  . Along the way to the temple there are some nice surfing beaches to stop such as Padang beach , Uluwatu Beach , Dreamland beach and many more . Uluwatu area is the paradise area for surfers and beach lover . 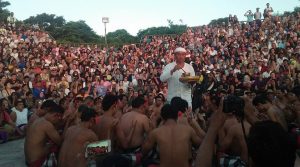 The most spectacular dance at Uluwatu Temple . The crowd as what in the picture is daily crowd at the stage . Sometime the stage can cover all the visitors who would like to see the dance .

Things that you need to know about Uluwatu Temple 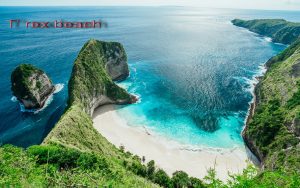